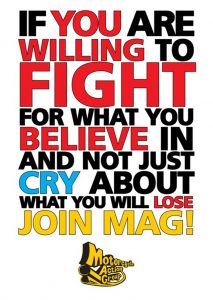 Chris Grayling, Secretary of State for Transport, met the Motorcycle Action Group to discuss transport policy, the environment and the role of motorcycles in reducing emissions. Mr Grayling and MAG met to discuss his position on transport and the environ-ment; and to establish the extent to which he has considered powered two and three wheelers as part of the transport solution, especially in urban areas. His primary environmental focus is CO2 and its impact on climate change.

Lembit Öpik, MAG’s Director of Communications & Public Affairs, explains: ‘MAG has spent much time and effort on the environmental agenda and the Minister seemed im-pressed with this. We explored the technical aspects and we agreed to send him further information. We also spoke about how motorbikes are part of the micro-mobility option, to encourage travel with the smallest feasible vehicles.’ The Minister also understands the need to innovate in the sector. He said: ‘the British motorcycle industry failed to respond to the competitive environment in the 1960s. As a consequence, it was side-lined for decades – until it reinvented itself with a good new long-term strategy. That’s what seems to be driving the success of Triumph and others now.’ Clearly, he approves of that success and of the vision it took to reinvent British motorcycle manufacturing.

MAG believes Mr Grayling will give powered two wheelers their rightful space on Britain’s roads as long as he is presented with the right evidence. This should also lead to a further dialogue with his team. There are clear benefits in terms of road space and environmental footprint and these could play a key role in the Minister’s thinking on motorbikes and scooters. ‘At a time when British politics is generally in flux, it’s a refreshing change to meet someone in power who puts doing the right thing first,’ adds Lembit. ‘MAG can do business with him and that’s definitely a very encouraging outcome of this meeting.’