Skip to Main Content
Congratulations Sheila Whittingham, winner of the 2020 Ellen Pfeiffer Award
Sheila Whittingham has been a member of WIMA GB since 1967 and has been active in her support of WIMA throughout this time. She even met her husband Eddie through WIMA! In 1973 she took over from Maureen Willis as Captain of the GB division – at this time the Captain did everything: badges, membership, organising rallies as well as the magazine, as there was no committee then. The news-sheet from the USA was becoming increasingly erratic, so Sheila found an old spirit duplicator and started sending WIMA News out as a monthly publication. Membership rose from 50 to 250 after Bike Magazine published an article on WIMA. Sheila continued as editor of the newsletter for many years.
Sheila has been riding since she was about 11 years old and got her first road bike at 16 – a BSA Bantam. She has owned and ridden a total of 42 motorcycles including her favourite, a 1951 Velocette Mac 350 touring. Sheila has attended WIMA and other rallies at home and abroad, she has passengered in a trials sidecar outfit and competed in hill climbs.
Sheila was the first WIMA national, then international historian for around 15 years. During that time she collected and stored a mass of material including WIMA newsletters and photo albums from 1965 onwards. From this she produced a terrific CD of archive photos called “WIMA – 52 years of fun from 1950 to 2002”. Sheila still rides all through the winter in snowy Wales at the age of 72, she still provides much help and information about the early years of WIMA International. Sheila is long overdue recognition for her more than 50 years of contribution to WIMA and truly deserves the Ellen Pfeiffer Award 2020. 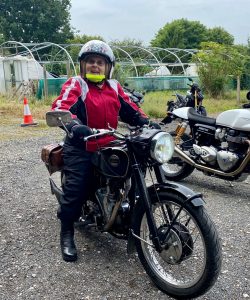