Bike EXIF is one of the coolest bike websites around – featuring great custom builds, information for tinkerers and practical reviews of new gear. It is a bit specialised – and is designed primarily for boy racers but, looking at some of the custom built bikes is a treat – This three-wheeler is a great one: 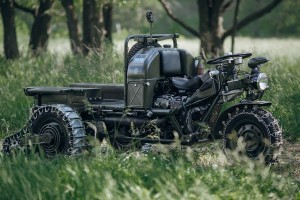 Designed for the Italian army, it’s sporting full-time 3WD, a six-speed transmission and a reverse gear.

It’s called the Autoveicolo Da Montagna (‘mountain car’) and it’s one of the most sophisticated military vehicles ever made. The design brief was simple: build a vehicle that could replace the mules used by Alpini troops for traversing steep mountain roads.

This example lives in a Russian museum called ‘The Motorworld by V. Sheyanov.’ Based near Samara in the southeastern part of European Russia, the museum is rammed with immaculately restored military motorcycles. But we’d take the Guzzi over anything else.

The restoration was carried out in Italy, though. It’s the work of maestro Costantino Frontalini, who runs his own museum for sidecars.

Click on the logo to go the the Bike EXIF site and see more bikes.