WIMA was started in 1950 by Louise Scherbyn in the USA, She learned to ride in the nineteen thirties, and rode thousands of miles over dirt tracks all over the USA and up to the far north of Canada.  A true adventurer, her 1940 Indian Scout is in the Springfield Museum in Massachusetts.  WIMA soon spread to Europe and new divisions sprang up in Germany and UK and other countries followed swiftly.  The first international rally was in the Netherlands in 1958.   You can see more about the international scene on www.wimaworld.com.

For a stunning collection of historic WIMA photos from the 1950s to the 1980s, visit the WIMA photographic archive.

Theresa Wallach, the first WIMA Vice-President, was extraordinary. Born in London in 1909, Theresa was a racer, motorcycle adventurer, military dispatch rider, engineer, author, motorcycle dealer, mechanic and riding school instructor. In 1934/5 she rode with a friend from London to Cape Town on a 650cc, three and a half horsepower Panther with a sidecar and a twelve-foot trailer, through the Sahara and down through Africa without a compass, but they did have a revolver to scare off the lions…..  Read her book The Rugged Road available from www.panther-publishing.co.uk.

In 1939, Theresa was the first, and possibly the only woman to win a British Motorcycle Racing Club’s coveted Gold Star for circling the famous Brooklands circuit at over 100 mph on a smaller 350cc single-cylinder Norton. Theresa’s Gold Star is thought to have been bequeathed to the Arizona state university along with all her other motorcycle memorabilia. Other notables included her friend Florence Blenkeron in 1934 on a 500cc Manx Norton, a newspaper report from 1934 states she covered a circuit of 2and a half miles at 102.06 mph, and another woman Beatrice (Tilly) Shilling also won a Gold Star, but Theresa was the first.

In an interview in 1977, Theresa said “When I first saw a motorcycle, I got a message from it. It was a feeling – the kind of thing that makes a person burst into tears hearing a piece of music or standing awestruck in front of a fine work of art. Motorcycling is a tool with which you can accomplish something meaningful in your life. It is an art.”

Go to www.motorcyclemuseum.org/halloffame  and search for her under “W” to read her full amazing life story.  Theresa was inducted into the American Motorcycle Museum Hall of Fame in 2003, four years after she died at the age of 90.

That tradition of adventuring by motorcycle continues to this day!  Join us and meet the women who are carrying on that tradition….. better still, become one yourself!

Anybody wishing to find out more about the history of WIMA should contact our Archivist. 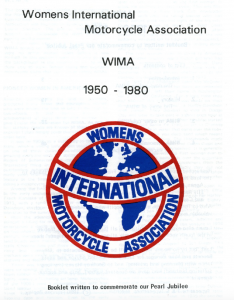