Dushi is the Papiamentu word for ‘sweet’ and this event certainly was!
Curacao is in the Caribbean, a small island north of Venezuela, in the Dutch Antilles. Though independent it is still under Dutch sovereignty and Rita Koopmanschap, who is the instigator of this event is a longstanding WIMA member, from Holland who is now re-
siding in Curacao, working as an English teacher. I last met Rita at the Spanish rally in 2001 and she has attended 32 International WIMA rallies!
Finding that there was a definite interest in holding an international rally in Curacao she and Carin Mercera, Captain of WIMA Curacao (started in 2011) enlisted the help of the other 13 members there to organize this amazing event. She said it took five years to do so.
There were 86 participants from 11 countries: UK, Australia, Finland, Germany, Hol- land, Sweden, Switzerland, Hungary, Estonia, Japan Curacao and Aruba (a neighboring Island).
As people arrived they participated in some pre-rally activities including horse-riding, a trip to the Natural History museum and the opportunity to investigate various sites in town including the slavery museum. On Friday and Saturday night the streets were alive with bands featuring in the Blues Seas Blues festival. World class musicians and a great variety of cocktails to try.
The official check in for the WIMA rally was on Sunday 21st, April at the Bed and Bike hostel in Pietermaai in the town centre where most of the participants stayed. There we signed up for several activities including bus trips around the island and the Scavenger hunt. The bus took us out to Kokomo beach for Happy Hour where we had complimentary cocktails and danced to a live band after a sunset swim.
Monday night was the opening dinner at a local res- taurant where we were introduced to the local girls, who rode their Harleys into the foyer, and also met the female minister of transport for the island. Pic of Dockside Peetermai 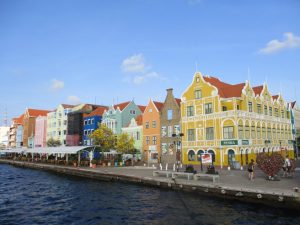 On Tuesday those who hadn’t hired a bike or scooter went by bus for a tour around the island. This is 60kms long but with a narrow ‘waist’ of only 14kms.There are many beaches and a varied landscape. Many interesting small roads to go exploring on. In the evening was a selection of ‘Caribbean Experiences’; workshops for dance, head-wraps and drumming for which we had previously signed up.
Wednesday we formed groups of up to 6 (the most different nationalities the better) and used photographing or videoing bicycle, bikes or cars or on foot to go on a scavenger hunt which covered much of the island and entailed the team finding places or activities which they had to photograph or video and post to the organizers to gain points. It was hilarious but took all day and was exhausting! 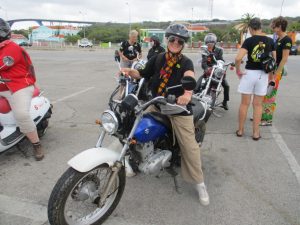 Me on a rented Suzuki – note the helmet!
In the evening we had a meet and greet with other island bikers and, for those who wished, an evening ride. I preferred to stay and drink. Thursday was a WIMA parade and most had hired bikes or scooters to participate. I had a 125 Suzuki beach bike, Terri Healand (WA) a Harley and Anna Noyelle (WA) a scooter. We covered a good deal of the island roads and stopped for lunch and drinks en route.
In the evening we went to the Curacao Liqueur restaurant for a special Culinary Team dinner and there was a traditional band and dancers. 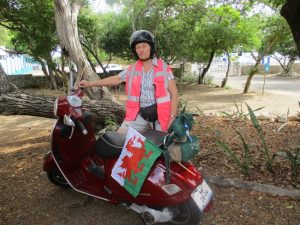 Pic of Ann Weir (GB) with a rented scooter
The Friday activity was a sail along the east coast on a catamaran. I took a seasick pill but found the trip very smooth with the dual keeled craft. There was a BBQ and open bar on board and the chance to stop and snorkel a couple of times. That night was the closing ceremony at one of the bar/restaurants in town where the banner was handed over to Ann Weir from UK to be passed on the the GB rally in August. Prize giving for the Scavenger Hunt (my team came last) and many words of farewell to everyone.
Saturday was Kings Day – a Dutch celebration marked by a ride with all the bikes around the island. We still had our rental bikes but handed them in that afternoon. Thus began the gradual evacuation of the participants to their respective countries; some staying for a few extra days. I stayed with Rita and Myra for two more days and had the chance to see a bit more of the island, including the Hato Caves.
The temperature during the time there was 25-30C, which it is all year, and of course it is humid. The rainy season is Sept/October.
The history of Curacao is fascinating as it has been controlled by Spanish, French and Dutch, with some English influence, thus the Papiamentu language is a mixture of all. 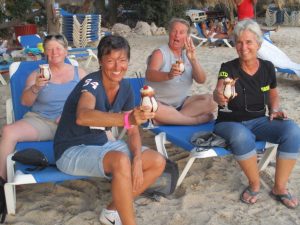 June (Fin), Melanie (D), Rita and Myra (Curacao)
In the 1800s it was a main slave trading centre where African slaves were distributed throughout the island to work on plantations. In 1915 shell set up an oil refinery
there but this was abandoned in 1985 due to pollution and breakdown of machinery. The islands main source of income now is tourism and it is a cruise ship port of call and a holiday destination for many Dutch people. It is ideal for scuba diving and snorkeling and there are many beaches, restaurants and beach bars and with year- long good weather is ideal.
All in all a very interesting WIMA rally and my congratulations to Rita, Myra, Carin and all the Curacao women who made it a very entertaining week.
Linda Bootherstone-Bick WIMA Australia