An initiative has been launched to tackle the rise in motorcycle crime.

BikersUnited.co.uk is a National Stolen Motorcycle Database where victims of theft can re-port their stolen motorcycle or scooter and alert other bikers in real-time to a theft in their area. The website also allows its users to report suspicious activity and those selling stolen machinery, with the aim of disrupting criminal activity by making it harder for thieves to operate. 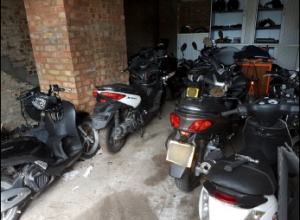 Once your bike is listed on Bikers United it’s fed into Google and automatically shared on social channels. If anyone sees your bike, they’ll locate your listing and be able to update you with any information.

Suspicious activity almost always precedes a crime, for example gangs of mopeds circling an area or individuals checking out a bike before stealing it. Witnesses to these small incidents may not want to report this activity to the police or Crimestoppers but the BikersUnited.co.uk system enables them to upload images and log any activity that when collated will make a big difference.

As bikers, we’re able to spot these criminals better than most other members of the public. These small snippets of information will be collated on BikersUnited.co.uk and supplied to the police to help them identify individuals and pin them down to a specific location and time.

BikersUnited.co.uk has been created by, Ben Cope, the same guy who started Visordown. Ben Cope comment-ed: “As an individual, it’s hard to tackle bike crime. How-ever as a group our collective input can make a differ-ence. While bike crime might not seem rife in all areas across the UK, it is at ridiculous levels in London, Liver-pool, Bristol and is spreading through the country as criminals switch over to bike crime. By working together, we can help raise awareness of bike crime on a local level, allowing owners to better protect their bikes. We can also provide more evidence to help the police fix individuals to times, vehicles and locations, increasing the chances of these criminals being successfully prose-cuted.”