We just learned that one rider a month does not survive the twisty, mountainous road from Ronda to San Pedro. Just as well we didn’t know that a few days earlier when Liz and I rode that exact road….in the wet! However that day, we’d had our ‘sensible heads’ on and, however much the temptation was to twist the throttle and look up at the amazing views, we went gingerly and carefully on the slippery roads. We also rode a bit and then stopped properly, at viewing points, to take in the full, sweeping vistas over the coast
of Malaga and looked at the sparkling sea, hundreds of metres below.

Today, however, the sky was blue and the roads dry. I’m riding a BMW 650GS and Liz is riding a BMW F800 R, hired from BMWMotohire.com. The bike tyres were warm, as we’d just blasted forty minutes or so, from our mountain base in Teba, to the mountains of Parque Natural, just west of Ronda. Turning off the A374 main road, we started on the gentle twists and turns, through cherry trees about to blossom and cork trees stripped of their bark, towards the pretty little mountain village of Grazelema where we stopped for coffee. We probably sat warming ourselves in the spring sun a little too long, because gradually, quite few tourist buses spilled their passengers out into the square of this quaint little town, disturbing our peace and quiet enjoyment.
Climbing higher, to over 1200 meters, we wound our way, twisting and turning, mostly in second gear, up to the top of Mount Prieto. From there, we looked down from our lofty perch, for miles and miles over the turquoise reservoir known as the Embalse de Zahara. It was really, really, turquoise, as if painted by a child, exaggerating the deepness of the colour. Somehow, it just didn’t quite look real!

There were few cars, but several super fit cyclists, puffing their way to the top. So we had to be careful not to cut blind corners and to keep to the correct side of the narrow D road we now found ourselves on. The road down to the lake was steep, first gear steep in places, so we carefully used a lot of engine braking and rear brake to complement the squeeze on the front brake. At one point, we caught up with a nervous car driver, also in first gear, jumping on and off the brakes in full panic mode. It took a bit of careful
negotiation, not to scare them even further, by getting too close to make an overtake, without them feeling pressured into going faster and making a serious mistake. The metal Armco barrier on the steep bends, had mostly given way to solid blocks of two-foot high, white painted concrete, castellating the side of the road. I wondered if they would be more effective (or not) than the Armco, in trying to prevent anyone from going over the vertiginous drop over the side of the mountain? Either way, I didn’t want to put them to the
test! I concentrated hard, looking for the vanishing point at each bend , watching for it to move away, close up, or just stay still, before making my decision to slow down or speed up. I worked the throttle, brakes and clutch briskly and carefully, knowing my life probably depended on each tiny little decision. 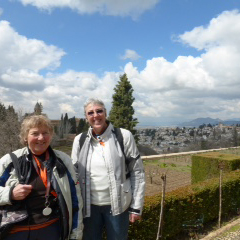 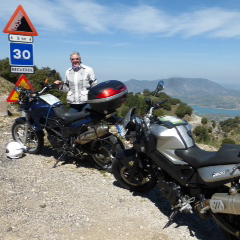 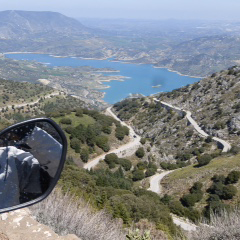 The road from Grazelema to Zahara is spectacular if you have a head for heights and you know what you’re doing on a motorbike. It was described by a journalist of a famous biking magazine as ‘a road so perfect, yet so challenging, that riding it is as close as he has come to having a transcendent experience’.

After the intense concentration of the tight mountains bends, it was a joyful relief when we reached the lake and started on the flat, wide-open, sweeping bends of the road that followed along beside the water. Liz now took the lead and spurred us both on with a fast change of pace. At last, we found the sixth gear that had eluded us in the mountains and thoroughly enjoyed tipping the bikes over from side to side, riding fast into and out of each curve. It was thrilling to ride fast with such an experienced and safe rider, who closely matched my own riding ability. Adding to the thrill, I hurried and cajoled on the small underpowered 650cc bike, in an attempt to catch up Liz on the 800cc…..Not a chance!

Liz and I had come to Andalucia to ride some of the most beautiful mountain roads in Europe. We both also wanted to achieve a longhand ambition to see the Alhambra in Grenada. It took us about two hours, in the early cold morning, zapping fast along the motorway to get to Grenada from Teba, but the journey was well worth the effort. If you’re ever in this area of Spain, you just have to put the Alhambra on your ‘must see’ list. The ancient walled city and palace is one of the most important architectural structures of the Middle Ages and the finest example of Islamic art in the Western world. It also contains the most elaborate gardens, with ponds, waterways and beautiful fountains. There are shady, hidden courtyards, balconies and ingenious methods of catching the cool breezes definitely needed in the heat of an Andalucian summer, but not at this time of the year!

Liz is extremely knowledgeable about plants and could correct my poor memory and names for plants and flora and was therefore an excellent trip buddy not just for the motorcycling, but also for the visit to the Alhambra. It really is a rather special place!

For anyone who fancies a few days away biking in the Spanish mountains, all that’s needed is a low cost return flight to Malaga and a booking with www.bmwmotohire.com. They can provide accommodation in Teba, a range of different motorcycles to hire and transport to and from Malaga airport. There are plenty of little restaurants within 15 mins walk from the accommodation and for those travelling in the summer, the accommodation includes a lovely swimming pool and the most stunning views over the mountains, that I have ever seen anywhere in Spain.

Meanwhile, if you fancy giving a ‘mini adventure’ like this a go and would like further information about how to do it, please do drop me a line at suebarnes@ntlworld.com