After our fantastic weekend at the Moto GP circuit we relocated down the road to The Shearing Shed, which was our rally site. However, first we had to get some wheels. We hitched a lift to Melbourne to collect the rental bikes at Garners, who kindly had offered WIMA a discount. Arriving at the shop was great, it was full of WIMAs who were being equipped with bikes and ready to roll. It took some time for us all to be sorted but in the meantime I could chat and catch up with friends from past rallies, so, as the Aussie say, “no worries”. 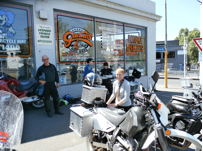 My Estonian friend, Anneli, is worth a special mention here: she came strolling down the street, not showing a sign of having run the Melbourne Marathon the day before, she is a true super woman! We met in Japan 5 years ago and stay in contact for both riding and running. In the shop was Anna from Perth, who I met for the first time in New Zealand, 10 years ago, and we travelled together for 3 weeks back then. I also met with Tina, my very first WIMA friend, who I met at my first rally, in Sweden 2005, on a ride out to Store Mosse National Park and we ended up having heaps of cake for lunch at a café with all you can– eat cake buffet (I think it is a Swedish thing)

After meeting and greeting, prepping and packing we got ready to ride. I had rented a BMW 650 GS – a lovely old bike – and so we made our way back to Phillip Island. There, we met up with the rest of the WIMAs and I was happy to meet up with more friends I had not seen for years, as well as friends I saw last rally in Sweden in July. The evening started with a delicious welcome dinner and an official opening of the rally with a welcome speech by the Australian President, Moira, and our International President, Claudia. After this, it was mingle and party, lovely to catch up with friends and to meet a few new faces as well. I have to confess that I was rather tired after the weekend and turned in early. I slept beautifully in the cabin, shared with Estonians, Japanese and Germans – it was an international house, which is the way I like it! 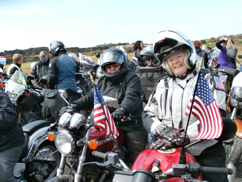 On Tuesday, most of us rode to a botanical garden, led by local guide Kathy, to look at flowers and plants and say (in her own words): “oh, that’s weird”. I also saw a little mousy animal, quokka, which made me feel that I had accomplished something that morning. On from this, we continued to an old farm. It never stops to amuse me when Aussies point out that something is very old, i.e. 100 years. Well, western culture is young in this country. I walked the farm with Liv and Margareth, both Australians, who related back to things from their childhood and their grandparents, and actually, these things seemed quite the same as things that my grandparents had on their farm. Funny thing this, culture. 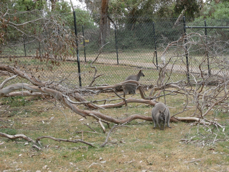 On the farm we could also see wallabies, and I was ruthlessly informed that the kangaroos I had seen 10 years ago were, in fact, not kangaroos, but wallabies. Imagine, during 10 years’ time I have treasured these memories of seeing wild kangaroos during Christmas in Australia. What a disappointment. I don’t know how I could have missed this, but honestly they all look the same to me, I just thought that the small ones grow to become big ones. Pretty much like small children regarding mice and rats 😮 Needless to say, this realisation made me feel silly! 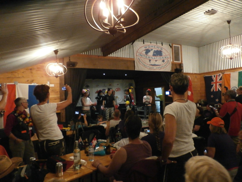 This is something that I try to avoid getting involved in and since I was the only Swede I had thought that I would be excused. However, there was no mercy, humiliation had to include everyone so I did an improvised tiger hunt, very similar to what I do with the 2-4 year olds when I’m teaching, but in English. Amazingly enough, people seemed to love it, WIMAs are a cheerful lot. Other countries contributed with stories or dance and song performances and everyone was making a real effort so why shouldn’t I!?

On Wednesday it rained, and then it rained a bit more. Nevertheless, Kathy guided us safely up to the wildlife reserve where we could see all Australian animals – now I was going to get this kangaroo problem clarified. However, that proved to be optimistic, they still look the same to me, I can’t really see the colour difference and it was not possible to line them up for comparison. I decided that kangaroos are not all that interesting, my favourite Australian animal from now on is the wombat. In the nursery I could pet an 11 month old baby. He was being brought up by a carer who worked professionally with this and he would return to the wild when he was ready, in a year or so.

In my opinion, animals should not be kept in captivity and on display for our amusement. I was in two minds about going but in the end I was happy I came. This wildlife park seemed to work well and they were, for example, working on preserving the Tasmanian devil, which risks going extinct due to a virus. However, I thought some animals did have very small areas, and I was glad to learn that, for example, the Dingoes rotate between the display yard and a private one to not become nervous. Regardless, there is only so much time I can spend looking at animals in captivity.
I decided to hit the road and ride, after all that is what I came to Australia for. This proved to be a problem, an embarrassing one. I had left the parking light on by mistake and drained the battery, or so I thought. Luckily, there were other WIMAs there, Keiko and Tei (Michiko’s husband) helped me push start, which didn’t work, and then Tei unscrewed the plastic covers to get to the battery so we could jump start the bike… well, we got this far before he noticed that the kill switch was on. Oh, if only the earth could open and swallow me. How embarrassing! I never use this switch, I always turn the bike off with the key. I reckon that someone had tried to be helpful and intended to turn off the lights for me. So, we assembled the bits again and I could get riding. I had a lovely ride back to Phillip Island, I rode twisty roads in mountains with tall eucalyptus trees that smelled lovely, and then I rode twisty roads over green rolling hills with a view that stretched far. The only animals I saw were sheep, quite a lot of sheep – but the riding was fabulous.

Another destination was Wilsons Promontory National Park, which offered stunning nature and wild animals – I saw emus, nothing else but the view was fantastic. Mountains, fields with gnarly trees, swamps, steppe, there seemed to be a bit of everything. The view was so good that I didn’t bother to try capture it with a photo, I knew I would be disappointed. This was a place where you could spend days hiking I had to do with a ride through, it was a beautiful ride so I’m happy with what I got. The following day I spotted an animal, an echidna, next to the road while riding out with Angie, brilliant with a local guide again. I was just following her tail light and riding in a meditative way and there it was, like a present. This sums up my experience of Australian wild animals, after this I only saw birds. However, if I need to make peace with the kangaroo issue I have an invitation to Anna in Perth for a visit at her friend’s kangaroo sanctuary – good to know that there is a solution if the issue starts gnawing on my soul. As the Swedish representative and standing in for our Swedish WIMA president Carola, who was unable to come, I took part in the presidents meeting. I’ve done this before and it is always interesting to take part in the discussions, besides, I get to go to the presidents’ dinner afterwards and eat yummy food. This year, the meeting was extra exciting since I was standing for the position of Vice President. The votes were in my favour and I’m happy to be part of the international committee and contribute to WIMA International’s development over the next few years. Wow, exciting stuff! And please, don’t think I do it only for the dinners – even though the Italian restaurant Moira had booked served marvellous food. Well done Moira. It was a good choice if Rossi eats there it has to be delicious and nutritious stuff, or!?
After this, the only major event that remained was the parade, which also happens to be my favourite event! We all prepped our bikes with flags and other national accessories (like inflatable kangaroos, some go all out). Together, we rode through Cowes and I believe our appearance was impressive, people stopped and waved at us. After all, it was a parade of 60 or so female bikers from 11 countries (Australia, Austria, Britain, Estonia, Finland, Germany, India, Japan, The Netherlands, New Zealand, Sweden, Switzerland and the USA). After the parade we had lunch at the workers club in Wonthaggi. I love this Australian concept of clubs, there seems to be a club for everything. Following this, I experienced something new: I went geocaching with the Finnish WIMAs. I got initiated by some real pros, they even had a GPS to track the location of the geocache. Amazingly fun. It is like a treasure hunt, but without the hassle of finding treasure. 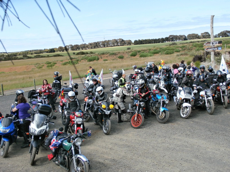 I believe this is a great way of getting out and about seeing different locations, especially if the locations are as beautiful as this. 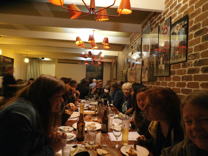 Thanks to the expert geochachers Mari and Taru for enriching my life. Lastly, there was a farewell dinner and party. Yet again, we were served yummy food so special thanks were given to the chefs and the staff at The Shearing Shed. Next year’s rally in Hungary was presented with a video as an appetizer and an invitation letter from Emeze, the president of WIMA Hungary. Other things that took place were the presentation of this year’s Ellen Pfeiffer Award to Uli from Austria for her accomplishments within the local WIMA branch, and Keiko, former VP, and Sanna, former web manager, were thanked for their service in the international WIMA committee. We also collected 256.20 Aus $ for the Motorcycle Outreach, which will go towards setting up a repair shop at their location in Tanzania. This last evening was more a wind down than a party, most people were going to continue their travelling in Australia for some time to come.